Skip to Content
Home Uncategorized A Weekend In Wisconsin
by

This past weekend takes the cake as one of the best of my life.
Friday morning, in one of my theology classes, in the midst of my friend Bethany’s presentation, my phone started ringing.
I quickly silenced it and responded to the caller– my friend Sheldon– that I was in class. His reply was quick and to the point:
Want to drive to Wisconsin?
Today.
To see Johnny’s soccer game.
I need an answer soon. I’m leaving at 4pm with or without you.
My mind started racing. My heart leapt into my chest at the thought of seeing my boyfriend, who lives in Winnipeg, and plays varsity soccer through the states. Sheldon and I had been planning on seeing his nationals games in North Carolina, but it wasn’t guaranteed that Sheldon could get the time off work. And, being the most spontaneous person I’ve ever known, it was not surprising to me that Sheldon would text me with the thought of leaving for a 12 hour road trip the very same day.
All the reasons I couldn’t go
You have so much homework, You work tomorrow, You volunteer at church on Sunday
flooded my mind. I slipped into the bathroom to call Sheldon and tell him I needed to figure some things out. And ask him that, if I could get things taken care of, we could please leave after my classes, so at 7pm. He agreed.
The events of this weekend were grounds for me to witness some of the greatest compassion, selflessness, and love I could imagine from many of my friends.
One of these people was beautiful friend and co-worker, Brooke. I texted every employee at Pure, the restaurant I work at, to see if anyone was able to cover my Saturday shift, and no one was able. Brooke works harder than anyone I know, and she told me that she would absolutely work the shift if no one else was able to, even though it was her one day off. I didn’t want her to be the one to work it, and fought her on it, but she ended up insisting.
Brooke, if it weren’t for you, I wouldn’t have been able to go on this incredible trip and support Johnny. I don’t want to say “I owe you–” I just want to show you love in the same way. Thank-you, a thousand times, thank-you.
I also received words of encouragement and approval from my incredible pastors and team of leaders at the church I go to, Risen City. They displayed grace, love, and understanding for the fact that I wouldn’t be there Sunday at the last minute– and also excited for Johnny and I to see each other!
And so, I packed my bags quickly before heading off to my evening class… where, even MORE last minute, Bethany decided to join, and Luke, our friend and Sheldon’s roommate, did, too.
With only a few bumps along the road (literally and figuratively), we embarked on our journey from Waterloo to Wisconsin, my heart fluttering with the thought of seeing my love, who I hadn’t seen in 2 and a half months, while he had no idea I was coming.
The four of us made for one of the most fun car rides of my life… except, of course, they would tell you that I slept most of the way there. Sheldon, bless his heart, drove for the entire trip on no sleep, from 8pm until 7am. We stopped only a couple of times, in between singing our lungs out, laughing our heads off, and, some of us, snoring quite peacefully. We couldn’t stop talking about how comfortable and close we all became so quickly and easily.


[wpvideo DirQbw1A]
I also have Jay, one of Johnny’s best friends and teammate, to thank for the fact that we made it to Wisconsin. He received my last minute messages with grace and excitement, and woke up early to make sure we arrived safely.
Sitting in a McDonald’s 8 minutes away from the hotel Johnny’s team was staying at, I couldn’t contain my excitement to just hold my man any longer.
“Can we just go guys?!” I bounced up and down like a little kid while my friends nommed their sausage breakfast sandwiches.
Jay let us know that Johnny was still asleep, unsurprisingly, but encouraged that we head to the hotel anyway. Jay met us in the front lobby where he noted, “We should just wake Johnny up. He wouldn’t want to waste any of the time he could have with you.”
So Jay walked me down a hallway to Johnny’s room, where, after some whispering, he knocked. And waited. And knocked again.
After a moment, a very sleepy, very bed-headed Johnny slowly opened the door sporting an unimpressed expression directed at Jay, until he saw me. His eyes widened, and he slowly said, “Whaaaaat?”
I could barely contain my excitement and energy, and neither could Johnny. “Come here,” he said, and we thanked Jay before having a moment to ourselves. And then all the questions came.
We went after a few minutes to see Sheldon, Luke, and Bethany, who had graciously waited in the lobby so Johnny and I could have a private reunion. Johnny was, as I suspected, so excited and humbled by these amazing friends having shown so much care in order to take a weekend to make such a long trip.
We got to spend the morning all together just catching up and chilling before Johnny got ready with his team for the big game, the game that would decide whether the team would go to Nationals in South Carolina.
While Johnny spent time with the team, we took a quick trip for lunch in downtown Watertown, Wisconsin. 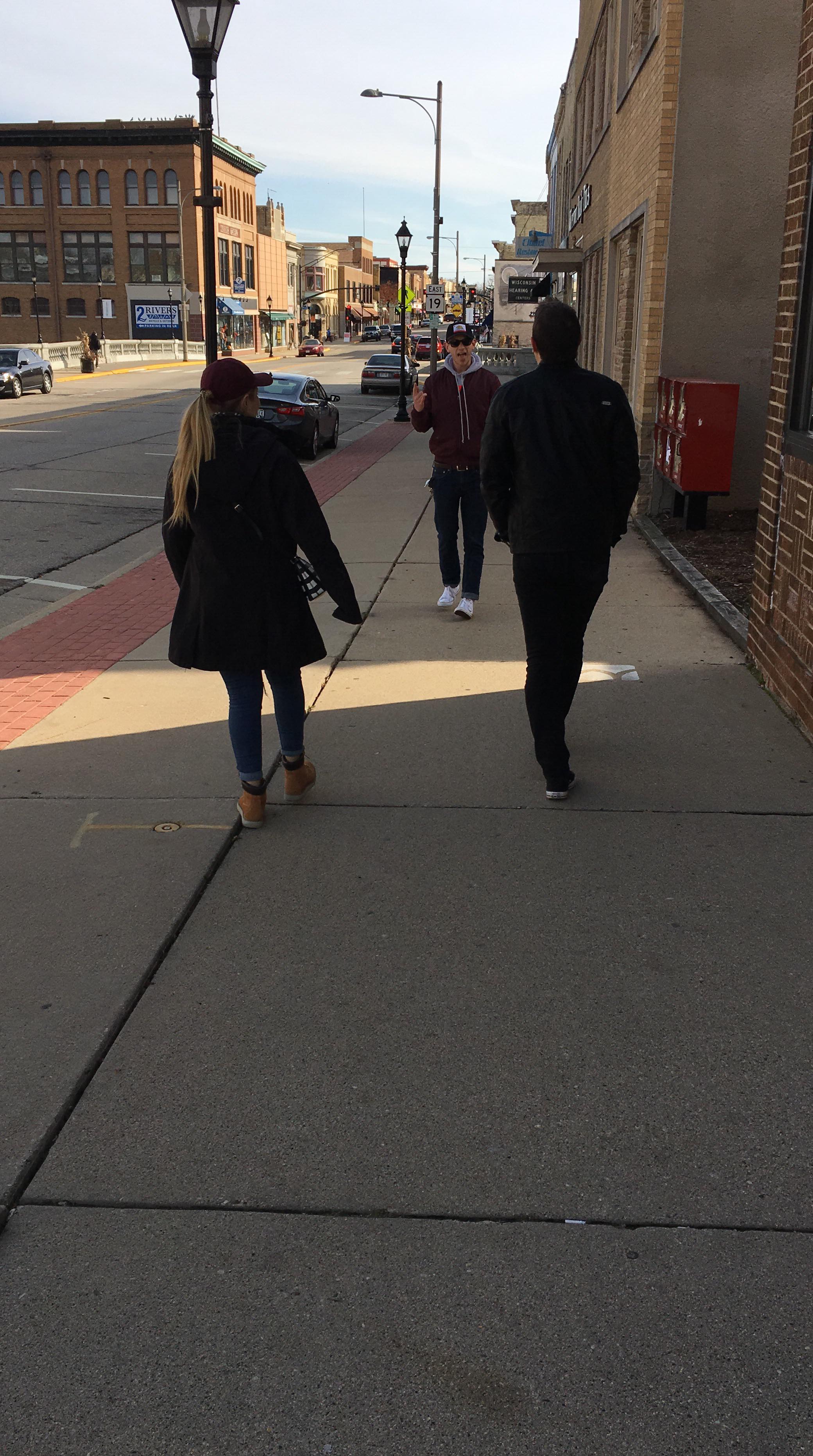 We all reunited at the soccer field to watch Providence’s girls’ soccer team’s game, which they won in an intense and hard-fought match that went into overtime. Then, we got revved up to watch Johnny play. 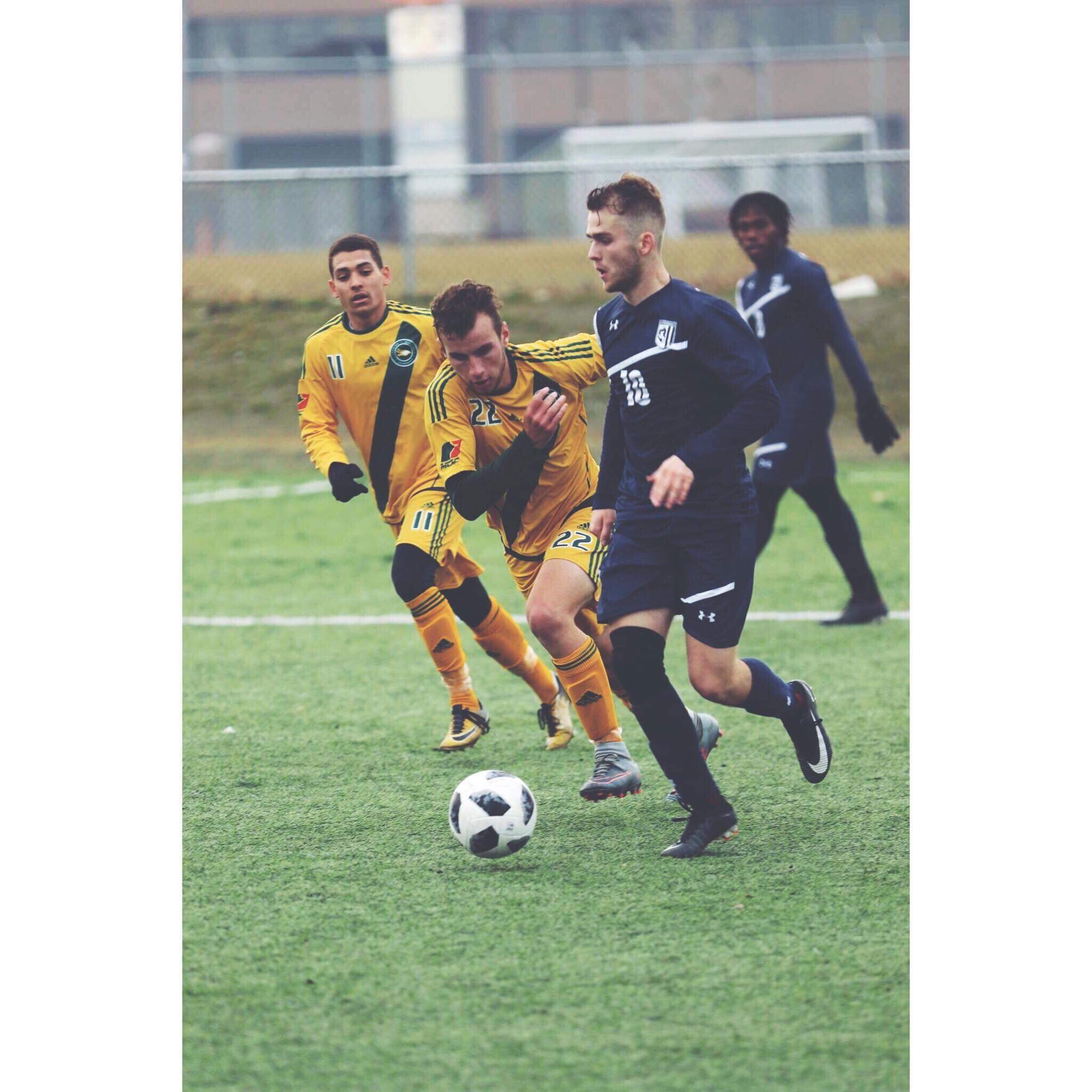 I can’t begin to put words to the pride and emotion I felt watching my man do so amazingly in what he loves. There is so much to say for the determination, passion, and love he has for this sport, that is the main reason he sought out his degree in Winnipeg. When we first started dating, soccer was just “soccer” to me. But I now have a love for it that comes directly from seeing the joy and passion Johnny has for it. Not to mention I have witnessed firsthand his skill in the sport grow tremendously since I’ve met him. He is the fastest, most technique-focused soccer players I’ve ever seen live. And I’m not being biased ;).
All this emotion and excitement made for an intense game. With so much pressure coming from both talented teams, the rivals scored one goal in the first half of the game. Not long after, though, the Pilots tied it up, ending the game in a tie that led to 2 ten minute periods of overtime, in which there was no score.
This led to an intense best of five shoot-out, in which Johnny’s team just barely lost. 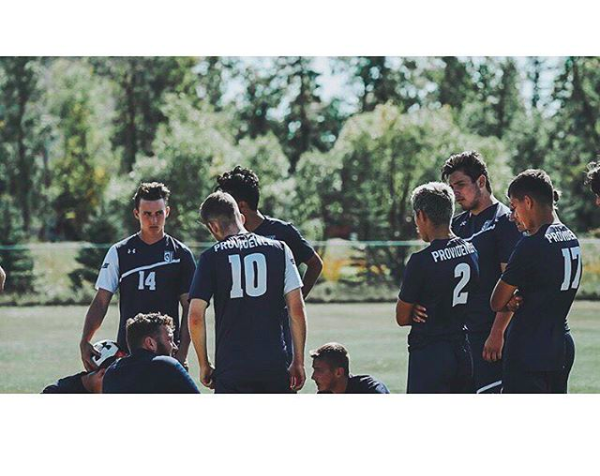 Walking over to Johnny at the end of the game made for a very emotional embrace. I just wanted to hold him forever, my Johnny, who looked so disappointed and defeated while still sporting a little smile, and overall amazing attitude. Thanking me for being there and just saying how grateful he was that I was able to be there.
Our goodbye was the shortest we’ve ever had, which made it difficult to process. Saying goodbye to Johnny always leaves me in a pool of tears that I always just want to be alone in. But, in the middle of nowhere 12 hours from home, I had no choice but to be surrounded by my three amazing friends in Sheldon, Bethany, and Luke… and this ended up being the biggest blessing.
We booked a cheap hotel, stocked up on snacks (dairy free ice cream only available in the States!) and basically crashed as soon as we got to our room.
I woke up the next morning incredibly disoriented. Had I really just seen Johnny? Was I dreaming? Where AM I?
As it all slowly came back to me, the friends and I packed up and headed out for our long journey home. Continually, and throughout the whole day, the patience, fun-lovingness, and compassion of these three beautiful friends inspiring me.
From IHOP to Chipotle, THE CHICAGO BEEEEEAN and a beautiful patch of fall trees, our trip home was nothing short of incredibly eventful. 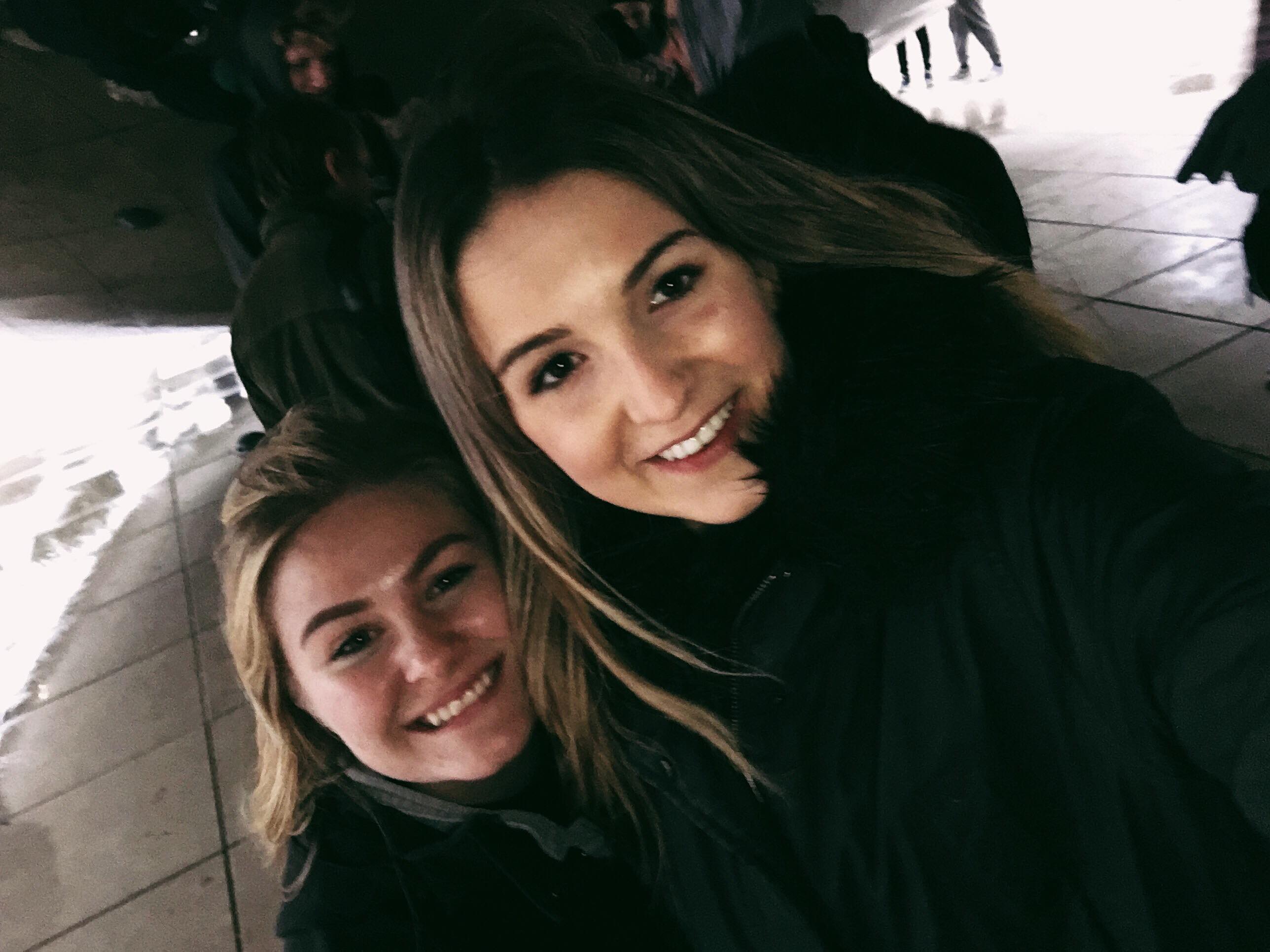 And the drive home took us to about 3am, where I ended up on my doorstep realizing I’d left my keys in the coat I lent from Bethany that I had given back to her.
Yet another show of kindness the end the trip, I had no other choice but to call my roommates, and Mary answered her phone graciously and kindly, coming downstairs to open the front door for me.
This spontaneous trip taught me so many things that I will never forget.
Selflessness cannot be planned. Spontaneous sacrifice is real sacrifice. My friends sacrificed time, money, and their own agendas for Johnny, and to support him. This is a true and real kind of love.
Routine is no way to live. I’m a creature of habit, and get very comfortable in routines and timelines and plans. This very nearly prevented me from embarking upon one of the most beautiful little adventures of my life.
People should be celebrated. If it weren’t for Brooke and Sheldon, I would not have seen Johnny this past weekend, or likely ever seen him play varsity soccer.
Little acts of kindness that focus on the other are what it’s all about. A parking garage monitor reduced our parking cost significantly, just cuz. Sheldon bought a homeless man a donut and coffee in Chicago, just cuz. Jay got up at 6:30am to make sure we were safe. Brooke sacrificed her weekend plans so I could see Johnny. Sheldon drove with no sleep to make it all possible.
I have been so inspired to live in a way that serves others, as I know this is the way to serve Jesus, the ultimate completely selfless lover.
What a weekend, and what a God, who has blessed me with such incredible people as role models, friends, and my amazing boyfriend.
Until next time, Wisconsin!