I think everyone knows a Leafs fanatic.
My dad is the biggest leafs fan. In fact, his basement is Leafs EVERYTHING. I don’t often watch games with him, so I didn’t always fully understand the games.
Those of you who are Leafs fans will remember Game 7 against the Bruins in 2013. A game in which the Leafs were up 4-2 in this Game 7, and of course every Leafs fan was thrilled. And because this isn’t my thing, I hadn’t been watching the Leafs lose for almost fifty years, I started to feel sorry for the Bruins. And I was telling my dad, “Awe, like this must be so stressful for them… look, the players look so sad.” And my dad was just laughing. And this is the game in which in the last like less than 2 minutes of the third period, the Bruins took the score from 4-2 to 4-4, and then won in overtime.
If sports are not what you live in, you’re not apt to pick up on these things.
Tell me rules and facts about sports, and I was always apt to forget them. It’s not that I want to, or don’t care about what my loved ones care about, it’s just that it’s not something that sticks with me.
Something I know like the back of my hand, though, is food. I love cooking, I’ve been following recipes since I was a little girl, and thus when I’m in the kitchen, I’m in my element. When I cook I like to add a little of this and a little of that, and taste as I go, no rules.
My roommate Maddie loves trying to cook different things, too, but she hasn’t had the same interest or passion or experience for it. A couple years ago she made lasagna, and I came home to her eating it and she asked me, “Cass what do you think is wrong with this… it’s okay, but it’s a little crunchy.”
I asked her all these questions: did you cook it long enough? Was the oven hot enough?
…
Did you boil the noodles?
“No.”
…OH, ok.
Maybe some of you are also like “What you have to boil lasagna noodles?”
To me this is common sense, a natural piece of info.
The same way I felt with Maddie, “How is this not common sense to you?” Or my dad with me, “How do you not get this, we’re ROOTING for the Leafs…” I can imagine that’s like Jesus with us a bit, when we forget that He is our purpose– except He has 50 billion times the Grace. 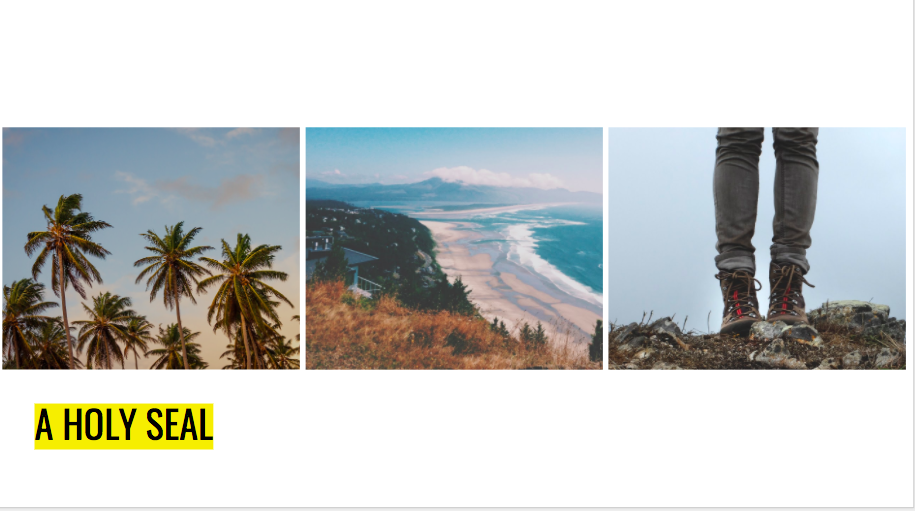 But I’m always amazed by the Truth of the Bible’s notes that we need reminders. I wanna share this passage from Peter with you– one of the first disciples– In the New Testament, he is among the first of the disciples called during Jesus‘ ministry. Peter became the first listed apostle ordained by Jesus in the early church.

Therefore I intend always to remind you of the qualities of the Spirit, though you know them and are established in the truth that you have. I think it right, as long as I am in this body, to stir you up by way of reminder…For no prophecy was ever produced by the will of man, but men spoke from God as they were carried along by the Holy Spirit. 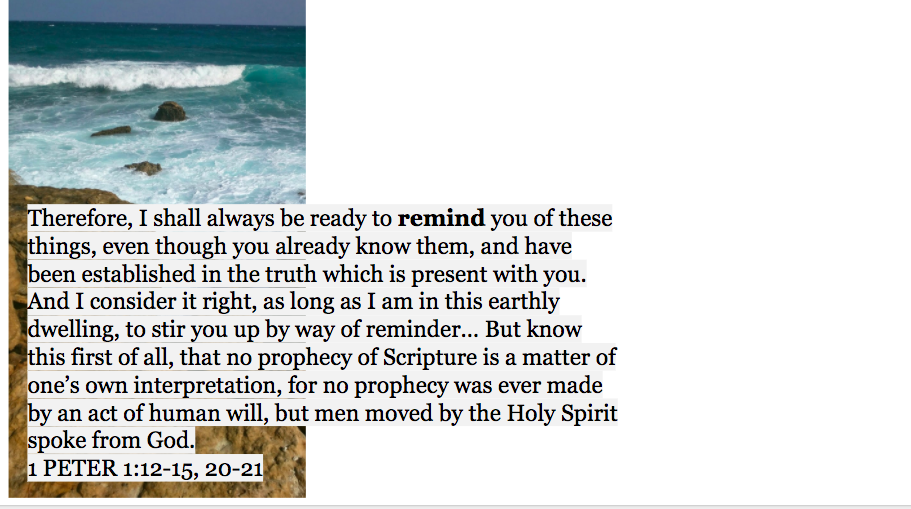 He writes here that he KNOWS we’ll need reminders. He knows that the world comes with things that want us to get caught up in them. He knows we’ll be tempted to put our hope and trust in other things and elements.
Little recap: So God created the Heavens and the Earth and all that is good. And upon recognizing the sin of humanity and our imperfections, He sent His Son, Jesus Christ, both fully man, and fully God!! into the world, who lived a perfect life, and then suffered death on the cross, TO bear our sin, SO THAT WE WOULD HAVE ETERNAL LIFE– that life starting NOW.
That is what the Vivid ministry is all about– “a fully awake, fully alive” life, through Christ. If you haven’t been out to Vivid yet, Nat has been working His way through the book of Ephesians, and like he’s talked about, it’s a letter to a group of early Christians in the New Testament about a bunch of important things he needed them to hear, and it is very tangent-like. It’s like a big run-on sentence. And we’re up to verse 13, which is this:

“And you also were included in Christ when you heard the message of truth, the gospel of your salvation. When you believed, you were marked in him with a seal, the promised Holy Spirit.” 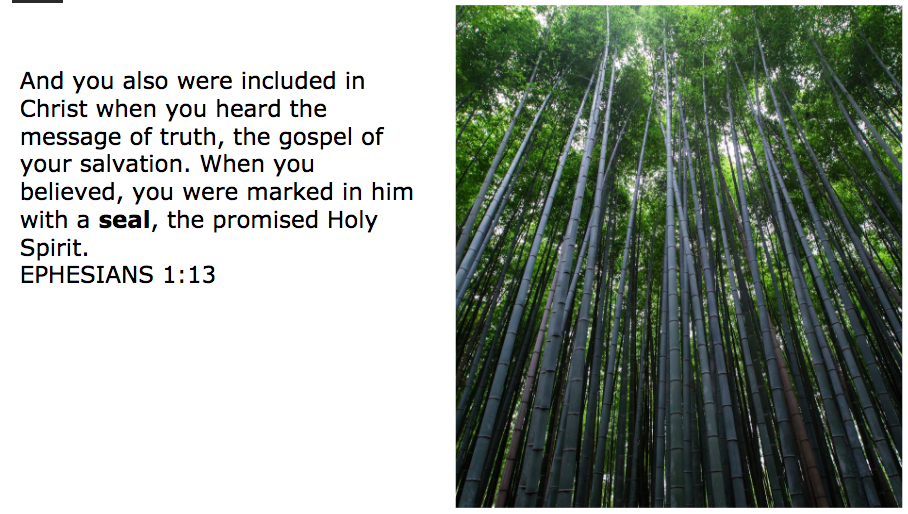 The order is to be noted.
First, the light of the Gospel, the Word of our purpose, shines before men;
Next, by faith they open their eyes to see it; then they are sealed by a special gift of the Holy Spirit.
The original meaning of the word SEAL was “something knit together by men and not documents.” But the word is used in a deeper sense whenever it is connected with the gift of the Holy Spirit. Then it corresponds to a “blessing not made even by humans, but by God, by the Creator Himself.”
This is nothing but GRACE.
When we hear and believe, we are SEALED with the Holy Ghost. From the original Greek, meaning “cannot be tampered with.”


Does anyone have that one grandma or aunt who gets the most delight ever out of wrapping Christmas or birthday gifts so that you can’t even open them? My dear oma, a kind and generous lady, wraps gifts as if she doesn’t want them opened, with every ribbon and piece of tape imaginable on it.
Picture a box like that, inside of you. With rings of tape around it, and a lock, and only God has the key. And He’s keeping it safe. Inside is His TRUE SPIRIT, when you have believed in Him and His Word and accepted Him. Not a mock or faux God– we don’t need to try to “be” Him or put on a show, because it is truly Him. Once His Spirit is indwelling, it’s “one and done.” This has always been the intent, our destination for this life.
Does that mean that we are perfect? No. We are not Jesus, fully man and fully God. We are fully man with ACCESS to God at all times, and so the goal of this life to allow Him to operate out of that spot He is sealed in.
What is a huge part of that?
LISTENING TO HIM. When we pray, talking to Him, and giving Him space to speak, to move the atmosphere. In His perfection, He WILL, no matter how that looks to us. Even in the midst of the moments when we’ve lived out of things outside of that box that He is sealed in, He can and will redeem those things.
So I want you to think about that box again. Contained in it is the Holy Spirit who is absolutely Holy. Like a present, that contents is not meant to stay in a box. While the seal itself cannot be tampered with, the contents will never not exist, it is absolute– but it is meant to be used.
Now think about everything else you live out of– spaces and things in the world, like hobbies, sports, maybe cooking, school. In His perfection, He can and will burst out of that box– His Spirit cannot be contained. He wants to be the umbrella over every single avenue.
So while He is sealed within us, He wants to be sealed above us, the identity in everything we do. When that happens, everything we do takes on a new meaning with eternal purpose.
And this word “sealed” is used in pretty much the exact same context in 2 Corinthians 1:21-22: This deposit is a guarantee, a precious gift only by the Holy Spirit, that cannot be earned. 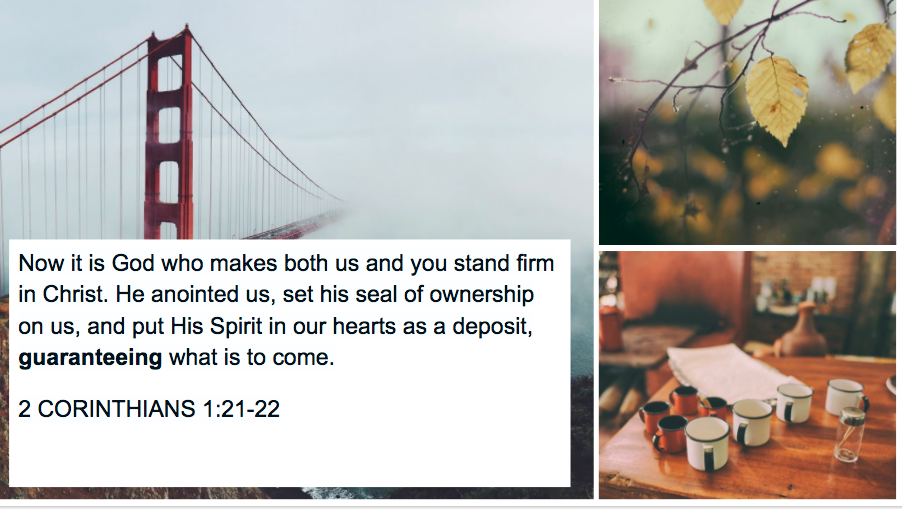 Remember I talked about cooking being something I knew because it was part of my world?
I used to actually be obsessed with cooking. Because I obsessed, it became the umbrella in my life. As crazy as it may sound, I began to see the world under the guise of food– obsessing over eating the perfect diet, my day and life consumed by what I put into my body. I thought I loved this way of living. In the middle of it, I thought this was great. But, in the midst of a lot of healing, when I consulted my living God about it, I knew that it was an obsession preventing me from living.
With God as the umbrella of these other minor things, I see food the way I always hoped to– a simple blessing, a means of fellowship, a part of every day for fuel. I still love cooking, but I don’t serve it– I serve God, and cooking is certainly a way through which I can serve Him. But when I consult the Spirit, sealed inside of me, I know there’s a way to do that that isn’t placing my identity in what I eat, but in giving glory to Him.
To do this, I’m not STRIVING out of mySELF, but SUBMITTING to Him. And Peter knew to remind us of these things, that it’s tempting to get caught up in the things of the world. 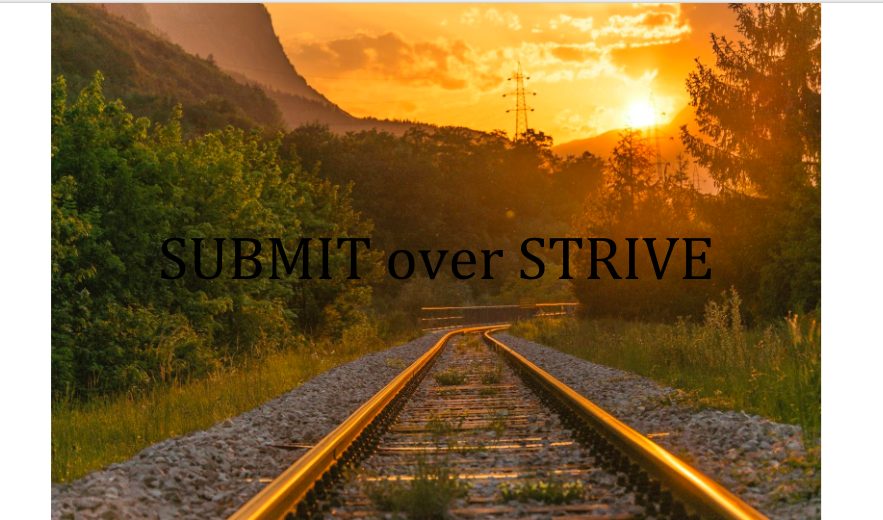 He knew that we would forget who to submit to, and the purpose of it. That it would become easy to put our identity in the tangible things– our physical health, our style, our brains– even these GOOD THINGS, that Jesús calls good, are not good when they become the umbrella. Let that box, that His active Spirit is inside, BURST, the contents spilling out over your life. Because these good things ARE good, but only when they are laid down at the feet of the one who MADE them good.
Submitting to Him, talking to Him– He can shine Truth over a porn addiction and teach what LOVE looks like.
He has Truth about reliance on a human relationships or hunger for affection, wanting our dependence to come from HIM.
The coolest thing is, there is nothing, absolutely nothing, that can stand in HIS way. He is not BOUND by any problem that could bind us. He is not BOUND in that box sealed inside of us. While that seal is there, PERIOD, there is nothing in this world that could worry our minds that He doesn’t have a plan for. All He asks of us is our first believing in Him through faith, and then submitting to Him, knowing that His Spirit is within us.
And just like the more we watch sports we understand them or the more often we cook the more we understand a kitchen, the more we allow Him to be Our Identity, the less we’ll need reminders. He takes over, and we are simply vessels. Our identity is not in our performance or progress or worldly skill, but in everything His Son has already done through death on the cross. Carrying our sin so that we didn’t have to, SO THAT we might live out of His Holy Spirit, out of that SEAL, giving glory to His name.