I am not picky when it comes to book-to-movie adaptations.

As an avid reader, I’ve been told people would guess otherwise; that I get worked up and nervous about whether or not a movie will “do justice” to one of my favourite books. The thing is, I love and appreciate movies in their own right, so I am usually pretty thrilled to see any adaptation of brilliant books.
Jeannette Walls’ “The Glass Castle” was no exception.

The movie is based on the memoir by Jeannette Walls; the true story of her breaking free from her abusive family. Life with her parents wasn’t all bad, as we see Jeannette and her three siblings stick together and love on one another, often loving their father and his trust in nature. Jeannette’s father saw the evil in the world, and wanted to keep his children from it; but his demons had driven him to become an alcoholic, abusing any money he made and leaving his family to starve, the alcohol turning him into a raging, physically and verbally abusive man. Jeannette was the only of her siblings to keep faith in her father and his unconventional ways of living, even though he often became a monster.
As cruel as her father often could be, he “had his moments,” and Jeannette agreed wholeheartedly with his constant reminders to stay creative and unstained by the world. Jeannette had always wanted to be a writer, and wrote story after story in her little notebook in her spare time. When she finally escapes her abusive home after saving enough money to move to NYC, Jeannette becomes a successful reporter for a popular newspaper, working with the “big shots” of the world. Successful in the eyes of the world, sure, but convicted that this isn’t what she’s meant to be writing about.
This true story teaches on the dangers of two extremes: believing we’re invincible on our own, unending of community, accountability, or any sort of closeness to the world; and, oppositely, the danger of clinging to the world and listening to society for the basis of success, caught up in its temporariness.

I would rate the movie an 8.5/10.
I thought it was phenomenally acted. Woody Harellson is one of my favourite actors of all time, and no one in the world could have casted the role of Rex Walls better. Brea Larrson and Naomi Watts were standouts in their roles, too, and the cast of children were all also incredible in terms of realism and character development.
The storyline was smooth and captivating. The movie was not too graphic while dealing with difficult and hard-hitting content, and portrayed its themes without being cliche. Its “glass castle” motif, among multiple metaphors, bits of humour, and consistent lighting were among the elements that grabbed and kept audience attention.
I would highly recommend this movie to anyone! 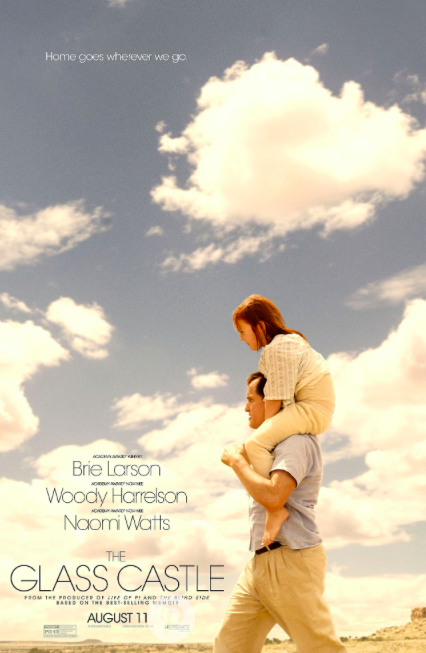