Here are the notes from the sermon I preached at my young adults group this past Sunday!
Have you ever witnessed a friend or someone in your life just making a really poor decision and you just wanted to shake them because it seemed so obvious to you that what they were doing was wrong? That there was an easier, better way?
I think all of us at one point or another have probably been both at the receiving end of this– so the one doing something stupid that we’re blind to– and the one on the other end, wanting to shake understanding into someone.
About a month ago, I was making stovetop popcorn for my roomies, just having a nice night in and asked who wanted popcorn, wanted to do a nice thing and make a snack for everyone. And I start making the popcorn and then there’s oil dripping down the sides of the pot and the burner is starting to smell really bad and I’m kind of ignoring and before I know it there’s a little flame in the burner. And I’m freaking out and jumping up and down like and repeating, “Oh my gosh guys what do we do,” as if THAT’S going to do anything, and then my roommate Maddie comes over and takes the pot OFF the burner, opens the window, and turns the heat off and she’s literally like WOW, THAT WAS SO DIFFICULT.
“What was freaking out and flailing your hands gonna do, Cass?” my roommates laughed. To them, it was such a sensical solution and I just wasn’t thinking.
Or, how many of you can relate to the mom-or-grandma not knowing how to use social media? I’ll read my mom some Facebook messenger conversation and she’ll be like, “Cassie, you shouldn’t be sharing that stuff on Facebook!” And then I’ll have to explain to her that, No, Mom, the conversation is not being seen by the world, it’s private messenger. This just doesn’t make sense to her.
Or have you ever had a friend who’s blinded in a relationship? You see all the bad aspects of it, maybe they’re being hurt, maybe they’ve neglected some of their morals, maybe they’re obsessed with this other person and you just want to shake them and say “YOU DESERVE SO MUCH BETTER! Why are you putting yourself through this?”
Or maybe it’s a friend who you see such good things in, you admire in so many ways, and yet they’re down on themselves, not stepping into that full potential. Maybe skipping school a ton, or just not utilizing their work ethic to live in their full potential. It seems so clear to you how wonderful this person is, and it’s frustrating to be on the outside of a situation like that. When something is so clearly the right path, and someone near you can’t see it.
We’ve been working our way through the book of Ephesians at Vivid, which is a letter in the New Testament of the Bible, so the part after the death and resurrection of Jesus, and Paul has just finished talking about why we must uphold unity and peace as Christians. And then he goes on to say these words:

EPHESIANS 4:17-19
So I tell you this, and insist on it in the Lord, that you must no longer live as the Gentiles do, in the futility of their thinking.They are darkened in their understanding and separated from the life of God because of the ignorance that is in them due to the hardening of their hearts. Having lost all sensitivity, they have given themselves over to sensuality so as to indulge in every kind of impurity, and they are full of greed.

These serve as Paul’s instructions for that “right path.” We should no longer walk with futility, of course, when we know otherwise. Or, he says, we should no longer walk “as the Gentiles do,” the Gentiles being people who didn’t know the saving grace of God and His love for them.
As I was reading over this passage, I was reminded of a person and I didn’t know why. I didn’t know if it was a revelation of God, or if I was just distracted, or if I needed some humour in my life in the midst of exam season, but this person kept popping into my head. 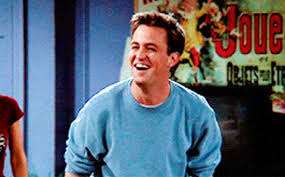 And I didn’t know why at first, but then realized– Chandler’s sarcasm makes him someone who states the obvious.
If you don’t know Chandler, he’s a character on a sitcom that started in the 90s, Friends. Chandler is the king of sarcasm, his jokes pointed at stating the obvious. Just check out this clip:
And then I figured out how all this linked to the book of Ephesians and Paul. What Paul is saying here to the church at Ephesus seemed so obvious to him that he says it later it in almost a dumbed down way:

GALATIANS 5:1 For freedom you were set free.

…Um, well, for FREEDOM you were set free. This reads almost like a redundancy, doesn’t it?
…Um well, yeah, obviously freedom is the result of being set free.
So why, then, do we ever live slave to things?
We were set free for freedom! Not to be yolked again to slavery! Not to be in bondage to sadness, fear, addictions, worry, anxiety! Not to be a slave to the law! But to be FREE! When he writes here, many commentators read it in that he’s a little frustrated. As if saying, “I don’t get why you choose to live the way you do! The solution is so simple! Christ Jesus is who you’re made to live for!” He feels the need to state the obvious because what should be obvious is not evident in the way people are living.
It’s like what Chandler Bing would do if he was making a sandwich and Joey asked him, “are you making that to eat?”
“Oh, no, I was actually gonna throw it in the garbage.”
Comparing that to if someone asked you, as a Christian, “Were you set free to be free?”
“Oh no,” so many of us say, the world wants us to say, “I was set free to be yolked to comparison, gluttony, idolizing, depression, and fear.”
I think in regard to these words, it’s important that we reflect on our current position. In any sense, all of us are in one of a few places:

Now the obviousness that Paul is stating here is not to dumb down or neglect struggles. Or to say a struggle with mental illness isn’t valid, or with bouts of worry aren’t valid. God sees those struggles, friend, but the thing is He doesn’t want to leave you there! See the God that came to us in Jesus is a miracle-worker, and He is going to be so good in that struggle and just asks you to have faith, and come to Him. So really To know that, even if you’re not LIVING in that freedom in this moment, IT IS freedom that God died for you for, and He’s going to bring you there. Faith that that freedom exists.
Have you ever had a conversation with someone that dies down quickly to colloquialisms, almost like you’re grasping at straws for what you’re trying to say? Like when you’re talking about balancing work and school and a social life and sleep and you’re conversing about that very thing with a friend and end up at “yeah, it’s such a balance.”
That “balance” we all talk about, I want to argue, is this perfect harmony that is Jesus, God made perfect in a human. And we have the notion that living with such a balance IS possible…
If we’re living with these convictions we sometimes just feel far from God and decide not to talk to Him because we don’t want to. But every encounter we have with His Spirit that seemed hard always ends up being amazing. And life-changing, right?
This perfect, balanced God is right with us through His Spirit, and wants to come into relationship with us.
And the thing we miss in “trying” to achieve this balance is the real thing worthwhile: stepping into conversation with Him rather than plunging along in our own way. Talking to Him with faith that every time we do, He’s going to guide and change us. Meeting Him in His Word, and engaging through faith in the Truth that He will change us.
And Paul paints that so perfectly in his next words about how to do what he’s talking about:

Ephesians 4:20-23
Put off, concerning your former conduct, the old man which grows corrupt according to the deceitful lusts, and be renewed in the spirit of your mind, and put on the new man which was created according to God, in true righteousness and holiness.

We’re not meant to do this alone. We’re meant to allow Him to have the reigns. We’re meant to submit to a higher power, and trust Him.
When we know that His Truth is THE TRUTH, that futility Paul talked about, of living selfishly, becomes a convicted way of living. His Truth eradicates other truths that have tried to take the throne in our lives.
Some of these are sneaky, like the doctrine of social media that says, “I’m only justified by the most perfect looking Instagram feed.” or the doctrine of progression that says, “I need to do better. I need to be better.” or the doctrine of reliability that says, “I need a relationship to be happy.” or the doctrine of lust that says, “I need to consume this, or veg out, to be happy.”
And in encountering this freedom, sometimes what we miss is thinking we need to display the freedom alone. But God-intended living is not self-autonomous. We were never, from the beginning of everything, meant to do any of life alone. It’s possible to get tossed about, then, by many different teachings, different presentations of who or what is the very purpose of our lives. But that’s when we have the solid Word of God, and His own Spirit, to align us with what is right.
And here’s the thing: “we can’t store up that intimacy with Him.” –Heidi Baker
He will change your heart. He will be so intimate with you. Help you to love, and to live to serve. Guide you into the Truth you were created to live for, and debunk lies that called you to live otherwise. We come to WANT nothing more than to put off the old self, and put on Him. He set us free, FOR FREEDOM, after all.
Let’s pray, and ask God what LIES He’s calling us to be free from. Maybe it’s something that doesn’t align with His Word, maybe His Spirit is stirring something up in you about the way you’ve been living. But when we come to God with these things He DOES change us. And sometimes community helps with accountability in actually doing that. So I’m gonna pray now, and then I would invite you to ask the Spirit a lie you’ve been believing, and what might be untrue about it and to start debunking that.
PRAY.