Skip to Content
Home Uncategorized WHAT I ATE WEDNESDAY: A Day To Remember
by

Today was absolutely beautiful and I am praising the Lord.

Every day I will praise you
and extol your name for ever and ever.
3 Great is the Lord and most worthy of praise;
his greatness no one can fathom. PSALM 145

Just last night before I spent time in prayer and praise I was going through my old blogs and found the WIAW from the first day I talked to Johnny. I still remember that day so well, God-given feeling throughout my conversations with him and now months later loving him, having grown through so much together and being blessed to be in love with my best friend. And today he took me to his hometown and to finally meet his parents!
I prayed over the day and lifted us and our hearts to Him, that Johnny and I glorified and pleased HIM in all that we did.
I woke up eearlier than I’m used to and spent quality time in the Word and in prayer. For breakfast before getting ready I had coconut yogurt with berries and cacao peanut butter. Very new for me!
Johnny picked me up at 8 and we headed out, the 2 hour drive personally going by way too fast for me as we did a lot of laughin, listening to good music and soaking in missing in each other and the goodness of the Lord and what He might have in store for the day.


Just as we were getting into Owen Sound, my phone rang and it was Starbucks! Johnny’s face was of excitement and support as I had clearly gotten the job. I’m so excited and actually can’t believe I’m officially a barista!
Once we got into Owen Sound, Johnny took me to a tall tower with steep winding stairs that overlooked the town and pointed out the spots we’d soon be seeing. The amount of trees was the first thing I loved, everything seeming to be covered from our view in leaves with some buildings in the distance. I can still feel standing there with him and I could feel it forever.
I think Johnny had a lot more to show me than he even had pictured. We pulled into Sara’s soon-to-be college, and then drove down a few streets to get to the main area. I got to see his family’s kitchenware/bathware/I swear everything store first where his parents were busily working. Johnny walked me through aisles of high end cookware, dishes, and other things, and joked “where’s momma?” because we hadn’t found his parents yet. His mom founds us first and after hugging Johnny hugged me tight and gave me a warm smile, saying I was “beautiful just like my pictures.” She is the beautiful one. And his dad when he was able to get over to us was just the same, and I felt the same sense of peace and welcome that I always do when I am with Johnny, that I praise the Lord every day for His work in.
We made plans with them to meet later for lunch and headed out downtown. So much of what was everyday to Johnny was either hilarious or never-before-seen or really cool to me, which ended up being cool for both of us. He brought me into a Christian store that also sold health food that I loved the premise of, past a bunch of restaurants (“this is where you get a good steak but mostly drunks”) (“this is a little cafe called the Bleeding Carrot” “I already love the Bleeding Carrot” “I knew you would”) (“this is the Pizza Pizza that has gotten closed down so many times because there’s a fight there almost every night”). So many stories, and memories, and places within one little block. We turned down an alleyway and headed back to the store where Johnny picked up some things he needed for back home and then went to lunch. We went into Subway and I had a six inch whole wheat turkey sub with most of the veggies and mustard. Oh, have I mentioned how many people in just walking around Johnny saw that he knew? In the Subway was his old co-worker at Staples; later at his school was a friend coming back for co-op he hadn’t seen in 4 years; and there were still many other “Johnny how are you?”s. The small-town-ness of it all made me warm.
Yes, lunch. Finally talking with Johnny’s parents was such a blessing. In the short time all the pair were was His light, and isn’t that all we’re called to be. They showed genuine caring about my school and program and blessed me with wisdom and kindness. I’m excited to grow with them in Christ alone that we have talks that are continually shining His light and after His goodness.
We parted ways after lunch and Johnny showed me his house next, which was beautiful. Lots of space and big windows letting in sunlight. Family photos and a beautiful kitchen.
Our next stop was a pretty lake sort of in the midst of everything. We put on bathing suits and missions over to a rocky area, dipped our feet in and freaked out laughing at the cold. I declared that we had to do it, we had to dip in and I did first, and treaded water for about 3.6 seconds before rushing back to the rocks where Johnny brought me a towel and I made him do the same, so he dipped and swam back up and that was the extent of our swimming but it was perfect. May have stolen a few kisses too.
We kept busy and went for a hike, which, besides standing in that spiralled tower was one of my favourite parts of the day. All I could think was COTTAGE and the hike fulfilled me craving for the cottage. Man, it was beautiful. We climbed all the way up and to the top where some rocks were to look out again at the town. Our way down, however, was another mission as it was steep and we came right into some construction workers, to whom Johnny said “we just got lost in the woods.” 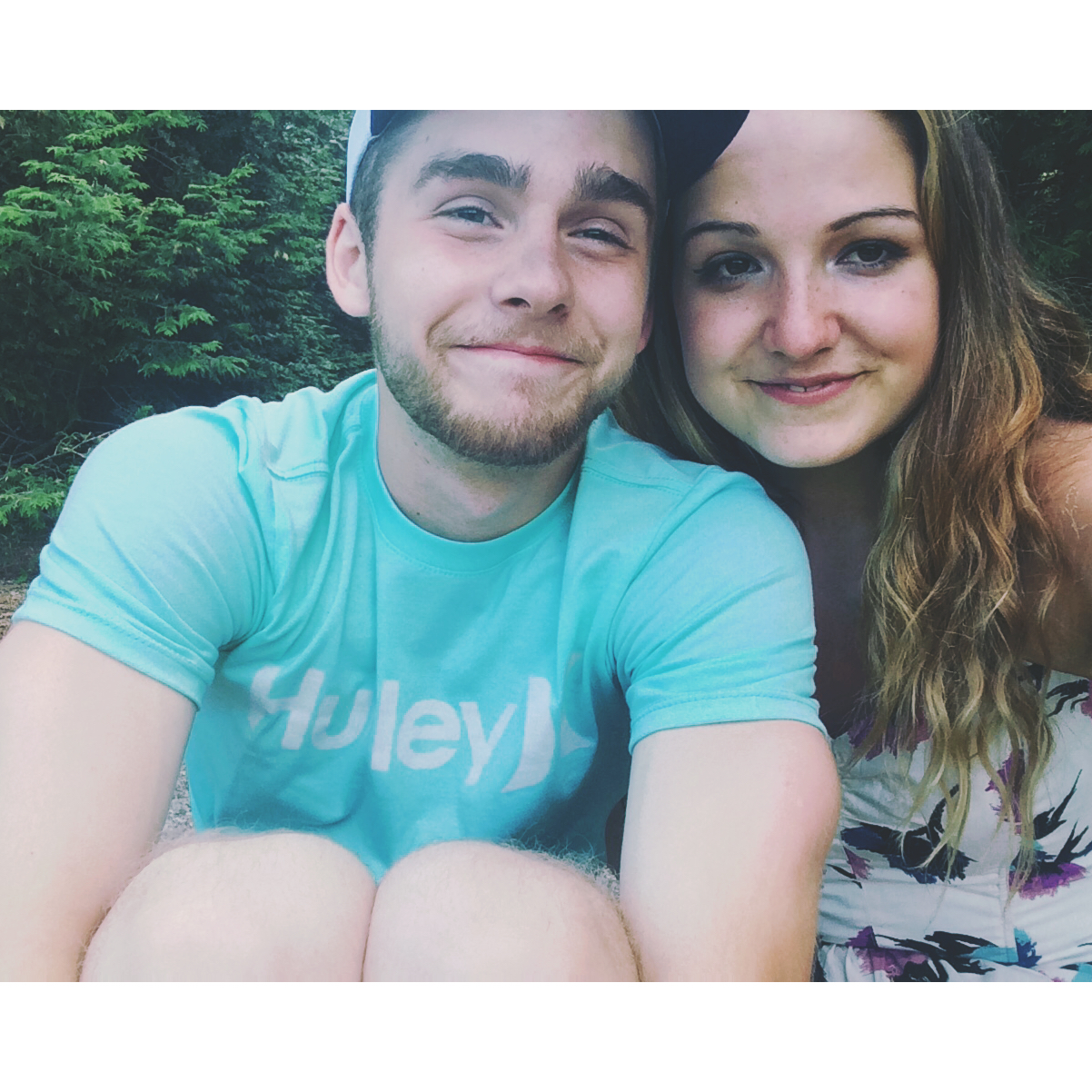 Johnny’s high school came next, where meeting his volleyball coach and running in to the old friend meant a lot to him, and so to me. We visited a pretty park and then the beautiful old abandoned house where they take prom pictures each year. We weaved our way through a garden and ended up on the other side, spending a lot of time there to ourselves basking in the love God has provided us that I know He holds dearly that is only special and pure and good because it is His. We know that our love for each other is of Him and for Him and His glory and I praise Him for that as the Lord needs always to be facilitating, our love and our hearts echoing His praises and goodness. Anyway, we had an amazing time together.

On the drive home I ate a Quest bar for a snack as I was really genuinely hungry! we had more serious, but Godly and good talks and some that I really needed. I trust Christ in Johnny with my whole spirit and know because of the Lord in him I can tell him anything and we can talk through it. I have witnessed the Lord’s work and His constant guidance on my heart to rigorous pursuit of Him that becomes just His indwelling, ah “just His indwelling,” more like MAN HE IS A GOOD AND WONDERFUL GOD HE DWELLS WITHIN ME, and He continually leads me to Johnny and that is all I listen to and all I care about.
The theme of the day felt like challenges; taking the jumps we’re presented with only in and by His Holy Ghost. Which always ended up being more fun, and the best way. Missioning, and doing it together and with God as our witness. Continuing to race to His arms and together, because that’s where He calls us and because as partners we lift each other up in His name.
When I was home again I shared about the day with my parents and had chicken breast with carrots and peanut butter for dinner. I still needed a snack afterwards so I had more coconut milk yogurt with berries and peanut butter.
There was genuinely no food focus throughout this day. Whatsoever. And that is something in Christ I so often experience when I’m with Johnny; a full and complete focus on the Lord which leaves no room for the food thoughts. I truly don’t think I had a single one, praise the Lord!!! The devil had no power over the day and the Lord continues to give me the shield that is His Holy Spirit for only more submission to His Spirit.
Yesterday was an immense blessing, and so is today. It is Jesus’s. It is good. It is beautiful. He is all.