Skip to Content
Home Uncategorized WHAT I ATE WEDNESDAY: Happiness, A Trigger For Relapse?
by

Whoo, hello readers!
First off, my blog reached 60 subscribers this morning and I thought that was really cool. It may be a small circle, but I’m hoping its reaching at least one life out there.
Anyway, on Wednesdays I let the food do a lot of the talking. I like these because I can look back and hopefully see progress! I athletes a lot of other stuff I wanna articulate, though, and it’s a little odd. You see, lately I’ve been feeling like I’ve been eating more, but writing this post now, I realize that especially for an exhausting day this was not nearly enough. But let me hash it out.
Breakfast. This morning I woke up, and watched YouTube and Netflix for an hour after my devotionals with breakfast, which was a quest bar, blueberries, and my homemade cacao Nutella. 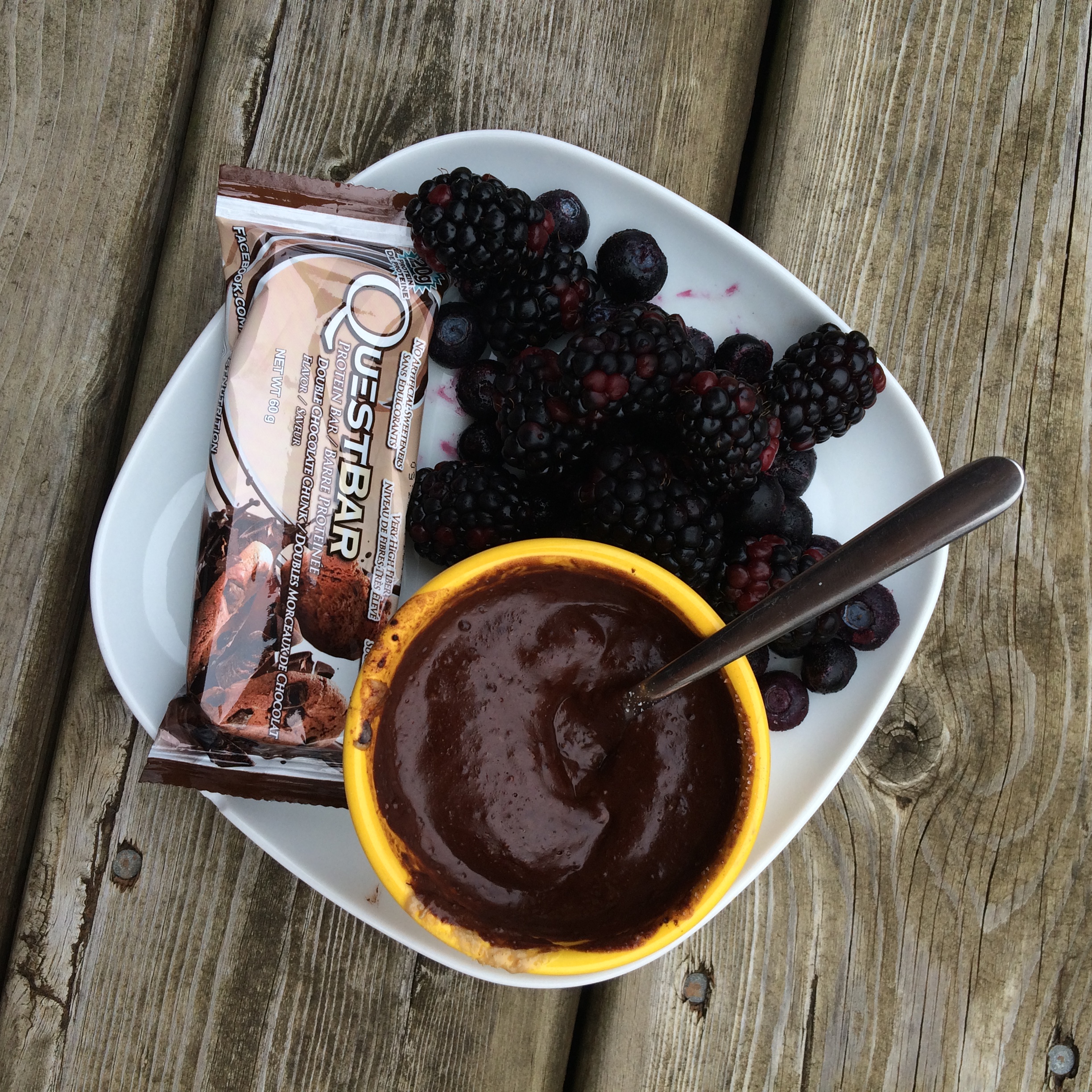 Lunch. Work was just one of those really great days today. I felt really into my job, had great chats with my co-workers, engaged with customers, it was just great. At the end of my six hour shift I asked Rachel to throw some veggies on the grill for me which I added bacon to and had with 2 slices of gluten free toast. 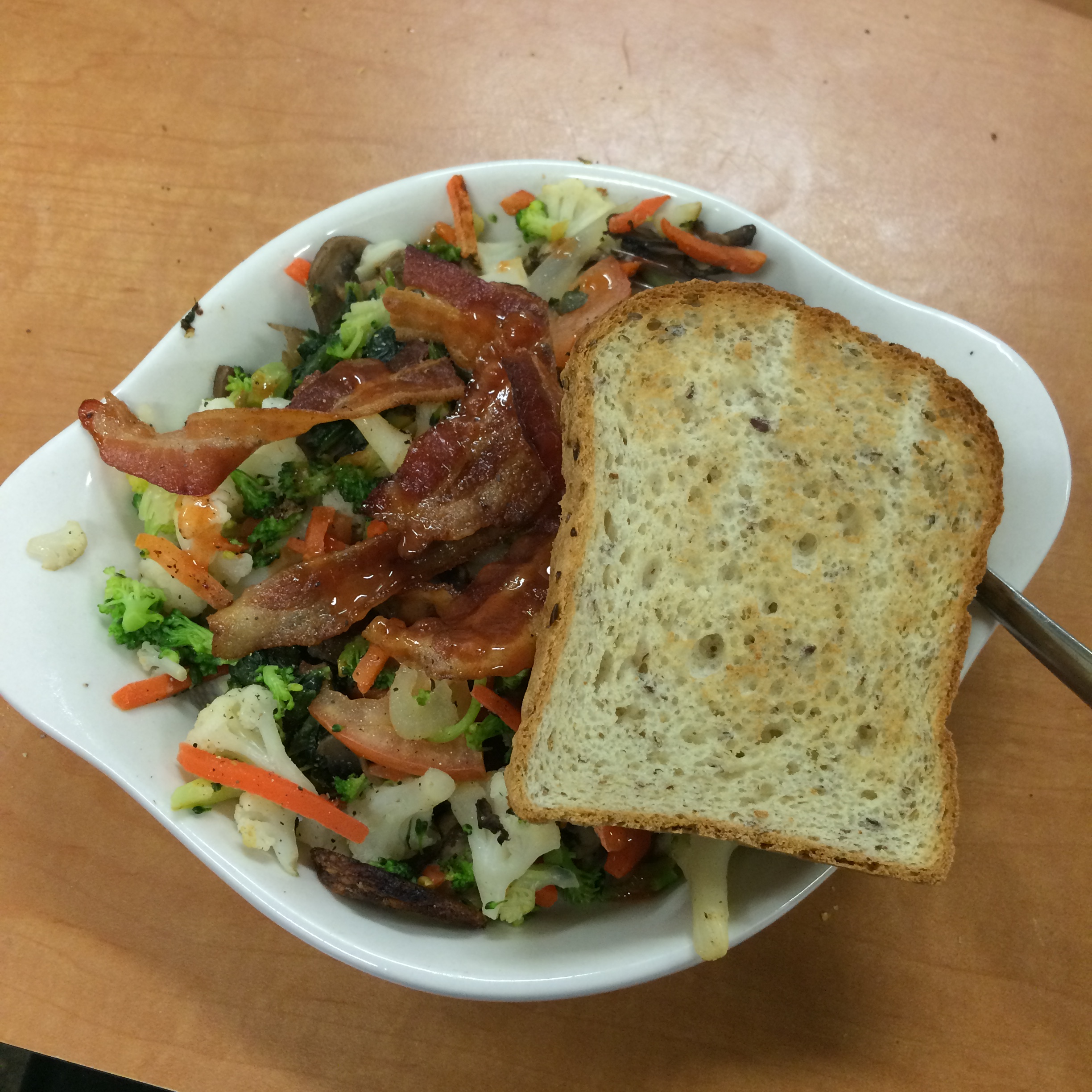 Snack. After work, I headed to Starbucks to meet my friend Zoe, who is one of the most AWESOME people I know. We talked forever about everything whilst I drank a grande coconut milk cappuccino. It was such a nice time. I headed to the mall then, did a bit of Christmas shopping, and then hopped on a bus for class. I should also mention that I chewed about 3 pieces of gum, which is a HUGE mental breakthrough for me.
Dinner. Tonight was my last Christian Studies class of the semester, so it was a little bittersweet, but it’s a mandatory course for each semester of my program, so it can only go up from here! We had a great class learning about eschatology. At the end, my friend Mary and I made plans to have a sleepover soon with Bethany and Maddie. I believe I’ve blogged about Mary’s letter to me, but the Spirit through her basically had everything to do with me getting my tattoo. She shared with me that that encouragement from God is what literally kept her in school. She had been going through a rough time recently and was ready to drop out, but held on after reaching out to me because God called to her through that. We were in tears talking about if and hugged at least five times. He is so good. He is so good.
Afterward, I sat in Starbucks for a little bit with a girl named Sarah, who I’ve gone to school with since I was seven, but never talked to in depth. She took Christian Studies as an elective, and we ended up having a really incredible conversation about how God has been calling and leading both of us to live out our Faith’s more boldly recently. Too cool.
Katrina drove me home and we had great, hilarious conversation as always. But it was 10pm, and I knew I hadn’t had solid food in about ten hours. Ed loves this. Ed feeds off it. It makes Ed HAPPY. And you see, since I had a very happy and soulful day, eating when I know I really need to can be more anxiety provoking than I can convey. But I ate. I ate exactly what I had for breakfast: a quest bar, loads of nut butter, and blueberries.
Praying hard tonight, and feeling beyond blessed for a beautiful day. Encouragement and strength to eat better and more tomorrow, and encouragement and strength to all of you. Xo